As Sir Alex Ferguson might say, it’s “sqweaky bum time” in the New Zealand recruitment agency world as firms of all shapes and sizes await the MED Procurement team’s decision of who to award panel places on the all of Government recruitment contract.  Meanwhile, on the other side of the world, one of the most high profile cock ups of failing to deliver on a recruitment contract of all time is unfolding in the build up to the London Olympics.

Just over a year ago G4S, the world’s largest security solutions group, were awarded the £284 million contract to supply security personnel to various Olympics venues for the duration of the Games.  After running a massive recruitment campaign and conducting screening, interviewing and some training, they then stopped communicating for several weeks with their “talent pools” of people.  Then, when they recently sought to re-establish contact as the Games approached, they were stunned to discover that many of their “recruits” had wandered off into other jobs or other locations, simply because they had no idea if they were actually going to get work or not. 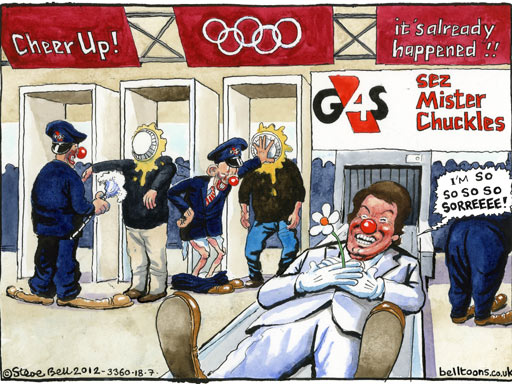 If ever there were a salutary example of how recruitment can be one of the hardest sales jobs going, by having to manage two moving targets and close deals between a client and a “product” both of which have minds of their own, then this is it.  But it is also a wake up call to recruitment firms that you can never allow yourselves a moment of complacency and further highlights the utter fallacy of “talent pools”.  Talent pooling is a lovely concept but in reality is about as easy as herding cats.  Extreme levels of candidate management and constant, clear communication are necessary to stand any chance of doing it effectively, and even then there will be more of those “moving targets” just waiting for the worst possible moment to let you down and decide they have changed their minds.  It’s a common complaint from candidates that recruiters don’t follow up or communicate effectively with them.  Clearly G4S have done nothing to suggest any different in this instance.  But how many times have you as a recruiter asked a candidate to let you know if their circumstances change, or if they accept another role, so you can keep abreast of their availability?  And how often do they actually do that?

This is also a stark reminder of how quickly you can go from hero to zero in recruitment.  It was only in May that G4S won the corporate employer award at the 2012 Recruiter’s Awards for Excellence for their:

“…highly innovative and effective direct resourcing strategy. This strategy enables G4S recruiters and hiring managers to recruit staff themselves without the use of third party intermediaries and at a fraction of the cost.”

A statement from their Group HR Director that “what we have achieved at G4S is leading edge in terms of corporate resourcing strategy and bringing outstanding benefits internally in terms of cost savings, consistency and efficiencies as well as a truly enhanced experience for our candidates and positive brand promotion” must be causing a great deal of navel gazing in certain corners of their HQ right now.

Just two months later their impressively-coiffeured CEO Nick Buckles was sitting stiffly in front of a Home Office Select Committee like a naughty schoolboy receiving a lecture from his public school headmaster, admitting they wouldn’t be able to provide the numbers of security personnel required  and basically admitting that he wished they had never won the Olympic contract in the first place.  No wonder as he watches over £1 billion disappear from the company’s market cap and finding out he has landed on the top of a very long snake when more used to climbing ladders.

I hope the AOG panel is announced today so that the successful recruiters can have a good Friday night celebrating and those not making the cut can have the weekend to get over it and realign their approach and strategy next week.  But I won’t hold my breath.  Nor will many of the recruiters I have spoken to recently who have pretty much recovered from the horror of the e-tenders two weeks ago and now sit in an ambivalent fug resigned to their fate one way or the other.

One thing’s for sure, a lesson can be learned from G4S.  Be careful what you wish for and, even if you do make the AOG panel, a lot of work, restructuring and strategising lies ahead to actually make it worthwhile.  I wish you all the best of luck.