The Whiteboard’s Guide to the 2017 Election

Never talk about religion or politics, or so American dinner party guests would claim. With the election looming, and my desk fourteen thousand kilometres from Manhattan, it’d be remiss of The Whiteboard not to stick its oar into the murky depths on the 2017 Election.

Refreshingly, it’s not the forgone conclusion experienced over the past 9 years. Like a stale recruitment firm under new and charismatic leadership, the polls indicate a resurgence from Labour, whilst according to their own data, the Greens have 112% of the vote. In this maelstrom of fake news and half-truths, there will no doubt be recruiters currently undecided on which box to tick.

Here’s a handy guide, in no particular order, to who you should be voting for on Saturday.

National: You’re a high billing agency recruiter. You’ve built your desk up from nothing, and smugly rejoice at month end. You offer commiserations to your “less fortunate” recruitment colleagues as they hover around threshold, secretly hoping that they continue to falter. You believe in dressing for success, and, after a few wines, let slip that you have over a million dollars of equity in your property. At night, you sob under the pressure created by your own egotistical lifestyle. Discounted wine fills the void of where a soul once sat.

Labour: You’re a plucky “top half” biller. Your boss thinks you could do more, but you justify your inability to close a door by the amount of “mentoring” you offer the younger recruiters in the office. You pride yourself on your collegial efforts, and tell whoever listens that you’re about “relationships” and not invoices. You guiltily spend your bonus on expensive shoes in an effort to compete with your more successful colleagues. You get the heel wrong and clump around the office like Quasimodo on P. You tell yourself you’re a socialist, but your child might have to go to a private school. You blame National for this. 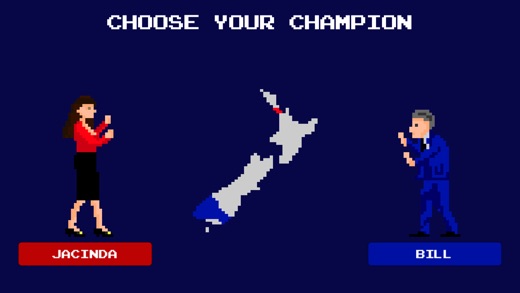 New Zealand First: You own a labour hire agency in Northlands and you despise your workers. You’d be much richer if it wasn’t for “foreigners”. Not only are they inflating property prices, but you’re also spending $240 a week on a Chinese prostitute in Whangarei. You sob afterwards. You watch provincial rugby through sad eyes and reminisce over an image of New Zealand that never really existed. 6 labourers don’t show up onsite.

Aotearoa Legalise Cannabis Party: You’re not a recruiter, but you’re in a recruitment office. WINZ sent you, and you’ve got three more to visit this week.

Green: You work as internal recruiter in the “not for profit” space. You’re making a difference and you’re proud of what you do. Deep down, you know that turning backpackers into charity muggers isn’t what you were sold at interview. You’re not sure if recruitment is for you. Your internal monologue screams  “am I actually helping people??”, but you drown this out with flavoured teas. You’ll probably go traveling, which you’ll call “volunteering”, but you’re secretly concerned that your armpits look like you’ve got Lenny Kravitz in a headlock.

ACT: You live in Epsom.

Māori Party: You’re an internal recruiter for a District Health Board. You start emails with “Kia Ora” and sign off with “Ngā mihi mahana”. Your agency suppliers mimic this in an attempt to place locum doctors with scandalous margins. You fear that one day they’ll realise that they’ve seen the extent of your te reo. You’re socially conscious with an interest in land rights. Secretly, the $400k you’ve made from flicking off houses under National is the land you’re most interested in. You disarm the most dissatisfied hiring managers with a hongi, and watch them crumble under a lifetime of ancestral guilt.

Ban 1080: You really really hate 1080. More so than you like education, healthcare, oxygen, and food. If you are a recruiter, you work from your bomb shelter and wear a tinfoil hat.

The Opportunities Party: You’re an agency recruiter in a smaller “forward thinking” recruitment firm. You spend far too much time on social media, and secretly believe everything you see on Facebook. You’re a recruiter “doing things differently” but wheel out the same tired nonsense at every client meeting. You wear a North Face vest instead of a suit jacket. You also tell yourself that you’re a recruitment expert, but a glimpse of your LinkedIn tells us you were selling web sites for Zeald 9 months ago.

…and on the subject of parties, although slightly less political, join us for Auckland’s premier recruitment booze-up, the RicePowWow, next Thursday. You’re all officially invited, just RSVP here.

Have a greet weekend folks. Remember to vote, and may the best man or woman win.