Have you got a seedy past? Don’t worry. So have I.

Judging by my Facebook, Election fever has reached boiling point in the UK. Talking about politics via social media is always a race to the bottom, and if you stick around a thread long enough, someone will demonstrate a surprising level of Islamophobia, “friends” will be deleted, and eventually, at some point, someone will be compared to Hitler. However, this time round, the political parties themselves have made the hoi polloi’s verbal fisticuffs look like amateur hour. Never have I seen politicians behave in such a puerile manner. It trumps Trump.

The prevalence of social media, and the discovery of its political power by Obama in 2009, has meant that political leaders no longer have to suggest that the “Right Honourable Gentleman doesn’t know his arse from his elbow” in Parliament. Now they they can share a photoshopped meme of a tennis racquet coming out of the aforementioned Right Honourable arse. And 50% of the population hit “share”. It seems that this time around, both parties have had hoards of interns scouring the interweb and old ladies’ lofts, trying to find as many incriminating photos of the opposition as humanly possible. These are then cropped, altered, re-packaged and sent out into the ether without context in the hope that it’ll ignite indignation in the masses.

One of the Conservatives favourite images to share, and one that, trust me, will cost Labour dearly, are a number of photos of the current Labour leader hobnobbing with Gerry Adams. For those not across British politics, Adams is the former leader of Sinn Féin, who campaign for a united Ireland, is rumoured to be the former leader of the IRA, the arch-nemesis of Margaret Thatcher, and the anti-christ to most of England. Essentially, do you remember all those bombs that went off in England in the 70s and 80s? Well, most British people blame this man. 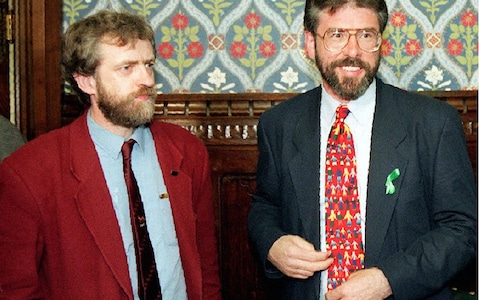 The Conservatives would have us believe that a vote for Labour is a vote for the IRA, and very much focus on Adams The Terrorist, and not Adams the legitimately elected Member of Parliament. Ah, if life was only that simple. Without being partisan, Labour are also guilty of such tricks, although admittedly positioning Boris Johnson as a bumbling, Champagne-swilling toff doesn’t take much photoshopping.

It is not only in the UK where photos come back to haunt leaders. Global good guy and Canadian Prime Minister Justin Trudeau got in heaps of bother this year when photos emerged of him donning the dreaded “black face” at a dress up party. The once untouchable liberal only just survived, and his stock will probably never been the same again.

In our industry, it’s become quite fashionable to conduct social media checks on potential employees. Just google “social media checks when hiring” and you’ll find plenty of stats, “how to” guides”, and tales of people having offers rescinded after questionable photos being discovered. According to the suits at Robert Walters a survey found:

62% of employers admitted they use social media sites to check on prospective employees. 98% will screen their LinkedIn profiles, 68% Facebook, and 26% Twitter.

And here’s the problem. Absolutely everyone carries a high quality camera with them all the waking day. And there are more photos of you, me, and them being uploaded than ever. And most of these pics come with no context or backstory. And, if Robert Walters are correct, we are increasingly being judged on these picture, with the judgment effecting our career and income. And often, we won’t even know about it. As we are now firmly ensconced in silly season, I can guarantee that tomorrow, someone reading this will wake up to find out that photos or videos now exist which they wish didn’t. It is happening everywhere and everyday.

So here’s a confession from a career-long recruiter; there are many, many photos of me, either online or in old smartphones (wherever they go to die), that would currently stop me getting a job I’d probably be really good at. If you search hard enough, you’ll find me dressed as a Nazi. You’ll find me in “black face”. You’ll find me so drunk I can’t remember my own name. And you will most certainly find me naked in all sorts of compromising positions. I would like to think that with the benefit of context however, that I wouldn’t be judged too harshly for any of these images. However, we no longer control the context. Once I could sit you down and talk you through my leather-bound photo album in the front room, but now, we make snap judgements on strangers based on a photo from 1996. I know from being a nosey bastard myself, that I’m not alone in this. Many of us have some seriously dodgy content floating around online. And  here’s the thing: as per the current trend, as a professional recruiter, I am supposedly expected to act like the photo Gestapo on behalf of my clients and judge you based on these images.

Well here’s the other thing. I won’t.

As the UK election has shown, an old photo doesn’t tell the whole story. And as my own situation dictates, sending a photo of my penis to a willing recipient, doesn’t stop me finding a client a great candidate. All things are contextual. There is backstory and explanation to every image. And perhaps, as an employer, it really is none of your goddam business. People get up to all sorts of things in their spare time, and if it doesn’t effect their work life, do we really have the right to exercise our own moral prejudice? Personally, I’m just not prepared to judge people based on their social media. There are plenty of other methods I can deploy to assess if someone can do a job, and if they have integrity, are trustworthy, and are all-round decent people. I don’t actually care about their Instagram.

That’s enough for me this year. Scott is back with the final blog of the year next Friday. Enjoy the holidays one and all, and stop googling my name you bunch of perverts.